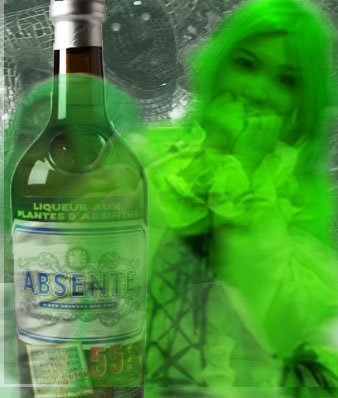 “None of which equals the poison welling up in your eyes that show me my poor soul reversed, my dreams throng to drink at those green distorting pools.” Baudelaire comparing and preferring absinthe to wine and opium in his poem “Poison”.

Absinthe has enjoyed a tantalizing reputation steeped in decadence, myth and controversy for over a century – the kind of popularity and staying power big-screen actors and rock stars would envy today. Invented in 18th century Val-de-Travers Switzerland, this supposed hallucination-inducing liquor has been rumored to cause convulsions, blackouts, visions of little green fairies, and rampant psychosis. The Fed’s ban on selling absinthe in the U.S. was in effect for decades.

In the 1990’s, its popularity grew worldwide, and eventually – around 2007 – the Fed allowed two European distillers to sell the liquor Stateside. Since then, many have attempted to tap the green fairy portal for visions of demons, angels, creative genius, and so forth. Some say a toxic chemical in wormwood, one of the main ingredients in absinthe along with anise, may have been the cause of these extreme symptoms, and not the liquor itself. According to one recent BBC article, however, “Contemporary analysis indicates that the chemical thujone in wormwood was present in such minute quantities in properly distilled absinthe as to cause little psychoactive effect. It’s more likely that the damage was done by severe alcohol poisoning from drinking twelve to twenty shots a day.”

How to Serve Absinthe

These days, many bar menus feature absinthe as part of a cocktail mixture. The two most popular methods to serve absinthe have been the Absinthe Drip and the flaming sugar cube. The Absinthe Drip, a classic method, involves the slow-drip of cold water onto a sugar cube sitting on a perforated spoon, held over a glass of absinthe. 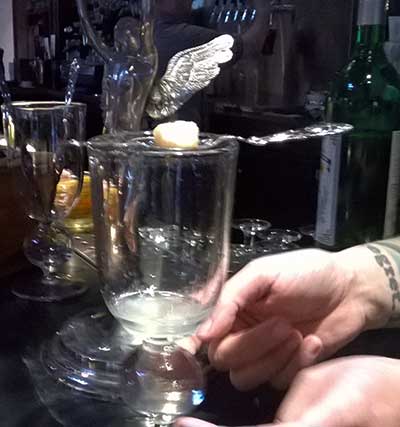 The water drips through the cube and into the absinthe, sweetening it. 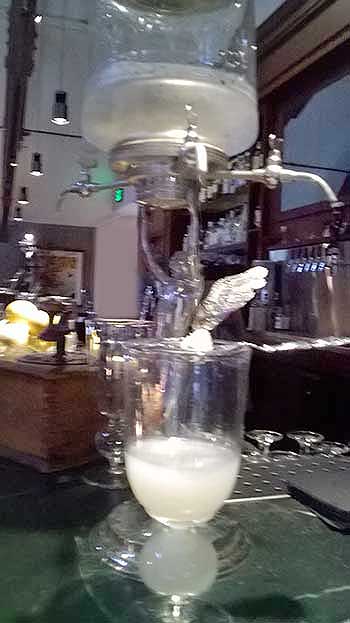 With the very stylish flaming cube method, you put the sugar cube on the perforated spoon, on top of an empty glass. You then pour the absinthe over the cube, soaking it as the liquid flows into the glass. Then, purely for the sake of showmanship, the cube is lit on fire, and the melted sugar slowly drips into the absinthe. Follow this up by adding ice cold water to the absinthe to get the cloudy effect.

Absinthe’s alcohol content of between 45% and 74% could provide a “transcendent” experience, although mainly without fairies.

I was at a bar one evening, nervously watching a very tall, red-wigged, platform-heeled drag queen in a green dress staring silently and very intensely at me through the gauzey curtains surrounding my candlelit alcove, before suddenly sprinting off into the darkness. The lesson here is, if you’re in the right place at the right time, green fairies can be seen even without absinthe.

Death in the Afternoon
A cocktail invented by Ernest Hemingway. Recipe in his own words:

“Pour one jigger absinthe into a Champagne glass. Add iced Champagne until it attains the proper opalescent milkiness. Drink three to five of these slowly.”