The beauty of downtown Victoria BC’s shopping scene is that all the fun, eclectic shops are right next to, or walking distance from, each other. Within one or two blocks, I could pop into several different shops for fine crystal, Irish wool jackets, Mediterranean tapas, carved chocolates, soaps that look good enough to eat, and a number of pubs.

It was a few hours before I had to meet up with family for dinner, so perhaps I could treat myself to a Victorian martini experience. The very distinguished-looking Empress Hotel sat across from the Parliament building in downtown Victoria’s inner harbor. I headed over, wondering if it was every bit as hoity on the inside.  It was. Which meant a fancy martini bar was waiting just for me. 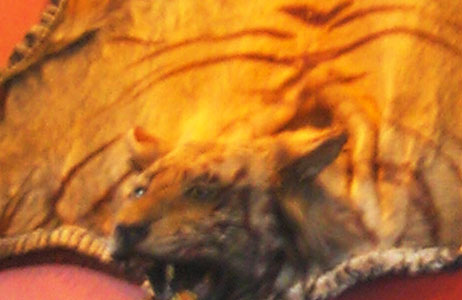 The immense doorway to the lounge was guarded by uniformed hosts. From the entrance, I took note of the expansive room’s large potted palms and sectional seating areas of plush leather sofas, with wide pillars of dark wood that rose and connected in a trellis-like design on its high ceiling. As I was escorted to my table, I observed the lounge had the genteel ambiance of a drinking establishment built for British gentlemen after a long, hard day of colonizing provinces throughout India. The fireplace was fronted by sofas and animal-print throw pillows, no doubt to complement the full-sized Bengal tiger skin hanging above the mantel. The tiger’s head was still attached, with a fight-to-the-death, “You’re taking my fur?! Oh, I don’t THINK so!” snarl forever frozen on its face.

Some ladies were playing a loud, exciting dice game at a table nearby. I was more interested in the idea of sipping cocktails in front of a roaring fireplace. I ordered the Empress 1908 Martini. Since it was the hotel’s signature cocktail, it had to be delicious and strong, right? Right? I posed the question to my server, an older gentleman from India (an ironic coincidence). He smiled politely and said nothing.

The Empress 1908 Martini was both confusing and disappointing. Made with Empress Blend tea-infused vodka, lightly sweetened fresh lime juice and frothy egg whites, its flavor was too subtle (okay, bland), its texture nog-like. As I drank it, I couldn’t make up my mind if I liked what I was tasting, or not. And I felt no holiday cheer whatsoever up until the last sip. I think the bartender left out the vodka and gave me straight tea.

There is a special place in Hell just for incompetent bartenders. There has to be! I spoke with my cousin, a cocktail connoisseur, later that evening, and he confirmed my suspicions – the Bengal Lounge’s martinis were all pussycat and no tiger. With mixology standards and martinis this weak, I highly recommend you seek your holiday spirits elsewhere!

Combine all ingredients and shake vigorously with ice. Strain into martini glass with a half sugar rim.

(Recipe provided by Fairmont Empress in Victoria BC, Canada)

One comment on “Bengal Lounge: Pussycat with Big Attitude”